To say WordPress has changed my life is an understatement.

I was 22 years old when I had my son. I had become single half-way through the pregnancy and had finished no other education than high school. Not that I was too dumb or too uninterested to get educated, I just didn’t know what I was good at. It was also smack in the middle of the financial crisis, so nobody in their right mind would hire me. I think I went a few grades below rock bottom at that point; having a social life when you’re a single, unemployed parent of a tiny baby is impossible and because I was receiving an income provided by the Dutch state, money was very tight too.

I was lucky to find an internship at a web design company. It was like a light bulb went on inside my head that first day of work. The internet had always held my interest, I just never figured you could actually get a job as a web designer or developer. To me, it had seemed that those jobs were for extremely nerdy boys, guys who spent all their spare time gaming and fiddling with computers. I didn’t think anyone would take me seriously if I said I wanted to get into code.

I couldn’t stay on at the web design company and finding another similar job without any experience was not going to happen. It dawned on me that if I wanted to continue in this line of work, I would have to do things a little different. By then I had gathered quite a bit of knowledge on different kinds of languages (like PHP), and I could convince the state representative to let me try and become a freelancer.

And this is where WordPress comes in. I didn’t feel like I was advanced enough to build my own CMS, and my (potential) clients needed something that was easy to explain, use and understand. WordPress fitted all those requirements. The more I dived into it, the more enthusiastic I became.

This crazy, fast moving, open source world allowed me to be what I had envisioned myself to be. I generated an income (although it wasn’t much the first year) by doing something I truly enjoyed, and I could always be there when my son needed me. Finally, I stopped feeling like the dumb, way too young single mother with no potential people had been labeling me as and started feeling like I had a place in the world. 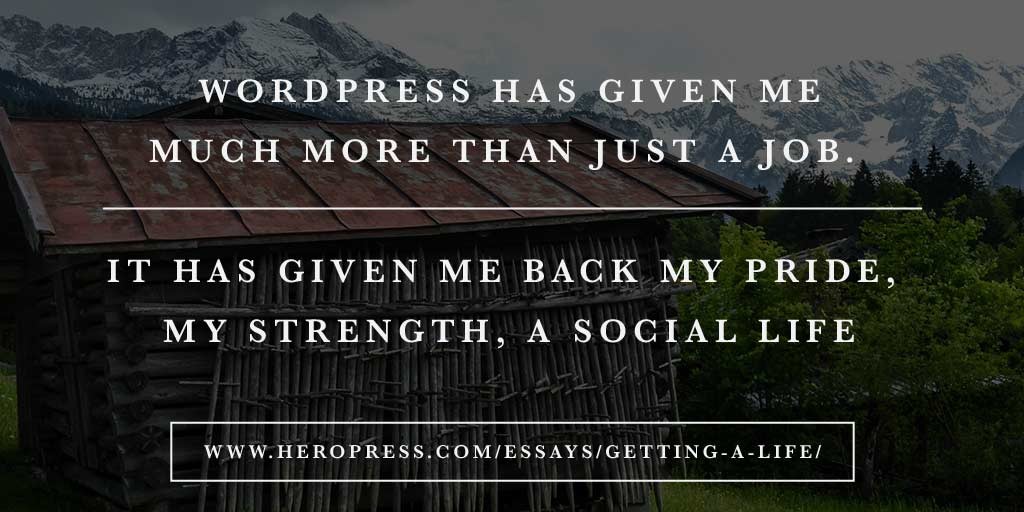 WordPress has given me much more than just a job. It has given me back my pride, my strength, a social life. Going to meetups has brought me new friends and like-minded colleagues. I even overcame my stage fright jitters and spoke at the Dutch WordCamp this year. It has taught me that if you give to the WordPress community, it will return the favor tenfold. And for that, I will be forever grateful.