Six days ago I climbed on a plane and headed to WordCamp Pune.  It took me about 24 hours of travelling, 18 of them sitting in narrow airplane seats. It’s by far the farthest I’ve ever traveled from home.

For those that don’t know the story, be sure to check out the post about why I went.  Just yesterday (the day I got home) someone pinged me on Twitter and asked if I’d really gone.  This interchange stuck with me: 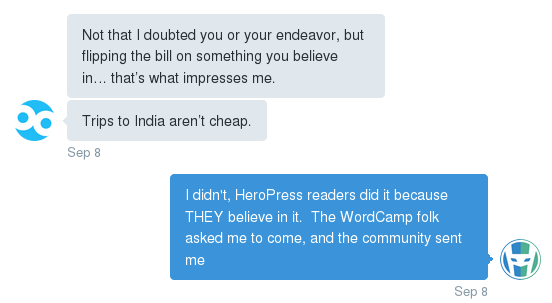 I did my best to tweet like crazy while I was there, even though there were large swaths of time when I didn’t have internet access.  If you’d like to read those tweets and see a myriad of pictures you can check out my twitter archive.  There are also some great pictures on twitter itself.

I have two blog posts in my head.  This one’s going to be about the people and experiences of my trip, and the other will be about WordCamp itself.  I’m also going to mention a GREAT many people, the names of most of whom I don’t remember.  That doesn’t mean I don’t appreciate them and the wonderful time we had together.

I landed in Pune on Saturday about an hour and a half earlier than I had originally told Saurabh I would be there: 3:30am.  Joshua was going to pick me up, but I didn’t know how to get hold of him.  My seat-mate on the plane was going right by my hotel and offered me a ride, and I was just about to take it when Saurabh, Joshua and Umesh came running toward me.

These guys came to the airport at 3:30am to pick me up.  Of course, they’d been up all night for WordCamp anyway, but still, it was pretty awesome of them.

When we got to the hotel the main gate was closed.  We went around the side and saw an open driveway and headed in.  I noticed a sign that said “NO ENTRY” as we went in.  About 10 feet in a guard came running up yelling and we stopped.  We had to go around front.

We pulled up to the gate and two guards opened it, and once we were in we were told to stop, and a guy came out with a mirror on a stick and a flashlight.  He walked all the way around the car and then asked us to open the hood and trunk.  Once they poked around in there we were able to go around a corner to the front door of the hotel.

To get in that front door I had to put my bag through a big bag checker just like at the airport, and a guy went over my whole body with a wand.  My passport made it beep because it had staples in it.

After all that he smiled and let me through.  These folks were really pretty nice, and though their English was poor we had a bit of a rapport by the time I left. Here are two of them. I wish I had a mustache like that. 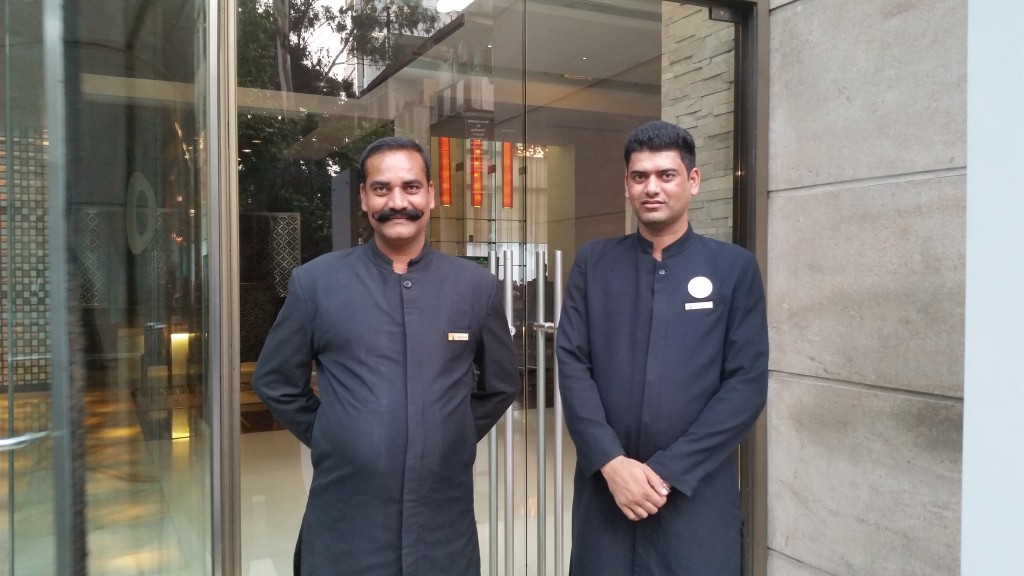 I went to my room, took a long hot bath, and crawled into bed for a couple hours.  My plans for Saturday were pretty loose.  The Alphabet Sambar group wanted to hang out with me some, I had planned a trip to the rtCamp offices, then unplanned it, and then got invited to Foundation Day, the intro to WordPress sessions for WordCamp.  I decided to go to Foundation Day, which started at 10am.

I found the address, but how to get there?  I tried to get people on Twitter, Slack, etc. with no luck.  I figured the hotel could get me a cab, but I didn’t have any rupees.  Then I remembered Uber!  I don’t need cash for that.  So I ordered a car, and then texted the driver that I only speak English.

I went downstairs and talked to the concierge about letting the driver through, and they let me know when he was there.  They even walked me out there to make sure I got in the right car.  I got in and the driver said something to me I didn’t understand and I said “I’m sorry, I only speak English”.  The he said something else in his language that I immediately understood to me “Oh geez!” and he leaned out his window and yelled for the concierge to come back.

After a relatively short period of time the drive realized I had put the destination address into the request, so he pointed at his phone with the address on it and said “here?”.  I said “yes!” and he thanked the concierge and away we went.

He asked a few questions on the way, but realized it was futile. We got to the address and didn’t see anything that looked right, but a guard nearby pointed us down a driveway where we met two more guards standing in the street.  After confirming this was indeed the right place I got out and they checked me with a wand for bombs and gestured toward a guard house next to a driveway.

I went in and told them where I was going and a guy said “For the conference?” and I affirmed.  He asked me to sign a book that several other people were writing in.  It needed my passport ID, phone number, and everything else about me.  All this just to get in.

But then I was in the main building, and I made it to Foundation Day.  I felt very happy with myself for having successfully getting across a foreign town without knowing any of the local languages.

I’ll write about Foundation Day in my other post.  I was there for about 2 hours when hunger began to make itself known.  I asked Sheeba, an organizer, what the plans were for lunch, and she said “Let me go see”. Then next thing I knew a guy was asking me what I liked to eat.

I’d like to take a moment to be very clear about my relationship with food.  I have some dear dear friends in the food world, and I don’t really hang out with other foods.  I’m the opposite of a vegetarian, and I really prefer to only eat the same things over and over.

That said, I was determined not to waste my chance to really try something new.  I may never get the chance again.  So I went for it.  I told him to pick his favorite food and I’d eat it.

He handed me his phone with a menu on it, and I saw several things that looked pretty good, and he said “Great!  We’re going to Malaka Spice!” Here’s a menu: 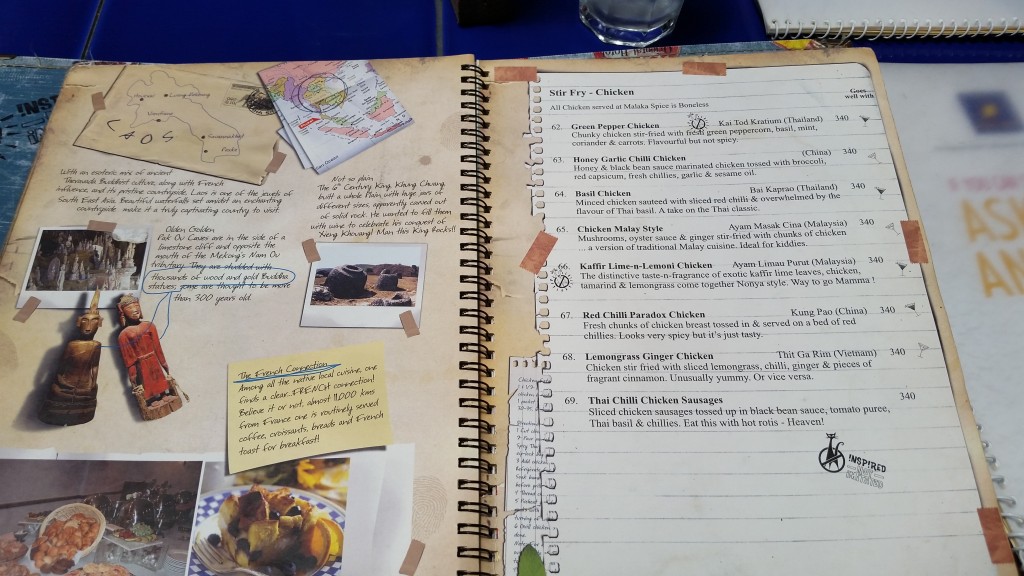 I ordered some fried duck with mango sauce and a chicken dish.  My lunch companion, Rahul, asked for some spicy sauce to go with it.  When it came he offered the spicy sauce, and I said “This mango sauce is pretty spicy for me” and he said “But that’s the sweet… Don’t eat this one.”

Rahul is an amazing man, part owner of rtCamp.  We had a long enjoyable conversation, and I was thoroughly impressed both by him and the company he runs.  rtCamp is a first class WordPress agency, second to none.  And I’m not just saying that because they spent dozens of company hours working on paperwork to get me to India.  They’re great people.

After lunch I went back to the hotel to crash for a little bit.  I ended up sleeping until only a couple hours before supper.  Then Rahul and Aditya Kane (a HeroPress contributor) took me to FabIndia to look for some gifts for my wife and daughters.  I picked up some great silk scarves which they seem to love.  Then we got a call that people had already started arriving for the speaker dinner, so we decided to head over there.

I’ll write more about the speaker dinner in my other post, but one of my favorite parts about this day was finally meeting people who had become dear to me.  Saurabh and Aditya were absolutely fundamental in getting HeroPress off the ground.  Long deep conversations that changed what HeroPress is, and changed who I am.  Ramya Pandyan I met not long after them and we’ve become dear friends in the past months.  Through her tweets I’ve gotten a much clearer view of what it’s like to be a woman in India.  Sheeba Abraham I only met online a few weeks ago.  Not only did we talk because she’s a contributor but because she was the speaker organizer for WordCamp Pune.  She went over and above to make sure I was comfortable in her country, never felt lost or hungry or thirsty.

They of course introduced me to people dear to them.  Here’s Sheeba and Raghavendra Peri at the speaker dinner: 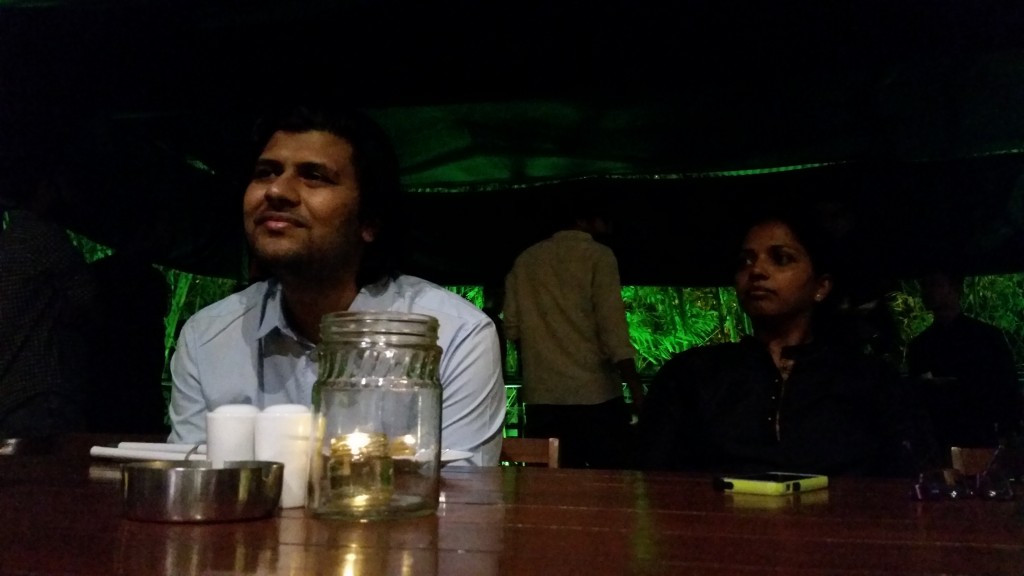 Raghavendra is a very cool person.  He’s blind and has a real passion for accessibility.  What struck me deeply is that his passion didn’t seem to be for himself, so that he could use the world better, but for others.  He already knows how to use the web as a blind person.  He’s working to make it better for others.  If I have my way he’ll be a HeroPress contributor.

There were many many other cool people I met that night.  Chris, an American living in India; Shaunak De, who taught me about jugaard; Mahangu Weerasinghe who works SO HARD to render the web in the languages of the Indian people; Siddharth Ashok who never ever seems to stop smiling; Karthikraj Magapu who sees the world so cleverly; and Shilpa Shah who seems to understand everything.

And more and more, names and faces I’m sure I’ll forget as time goes on, but the impressions and wisdom and joy I got from them will go with me forever.

Thus ended the first day.  I felt like I’d lived 10 days.  I went back to my room, wrote a blog post (which I fell asleep in the middle of several times) and went to bed.

Tomorrow I’ll write about a long day full of WordCamp.